The administrator of the U.S. Environmental Protection Agency says she “absolutely” has the “flexibility” to impose Clean Air Act rules in rural areas that are different from the rules for more populated areas of the country.

“This is not her first farm visit,” Vilsack said during a question-and-answer session with reporters. “She’s been to a number of farms across the country and we have collectively met with commodity groups on a fairly regular basis to talk about issues that are important to farming and agriculture and she’s been very willing to have an open mind about things and also an opportunity to dispel some of the myths that are out there — this is an opportunity to continue that.”

Ag groups worry the E.P.A. will establish new rules on dust that will force farmers to make dramatic changes in the way they till the soil. Jackson cautions against overreaction.

“What happens is that people start getting worried about things that haven’t happened yet,” Jackson told reporters. “And they’re worried, you know, on both sides.”

According to Jackson, her agency must conduct a review every five years about the “threats” of fine particles — things like soot or dust — which lodge in the lungs and can cause heart attacks and premature deaths.

Jackson is mulling two options: leaving the standards for dust in place as they are today, or enacting something tougher.  She plans to announce a decision in July.

“I am happy to come out and speak to people and listen to concerns,” Jackson told reporters. “Sometimes we get it wrong. I don’t want to act like we always get it right, but I also need to make sure that the information that goes out is factual and accurate and right now I would say folks have nothing to worry about right now with respect to dust and it’s certainly not worth taking away the health protections that the Clean Air Act gives to us and gives to Americans all over this country.” 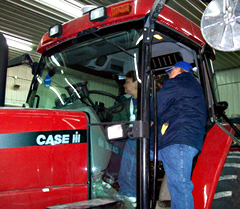 Jackson and Vilsack visited a livestock farm near Pleasantville early this morning, as hail pelted the area.  Early this afternoon they stopped at a farm near Prairie City where Jackson climbed into a tractor for a tutorial on the computer system that controls the farm chemical sprayer the tractor pulls through fields.

Farmer Gordon Wassenaar also showed Jackson some of his conservation tillage practices, through a window in his farm shed rather than a walk through the field as rain continued to fall.