You are here: Home / Human Interest / Black lettering will soon show up on Iowa license plates 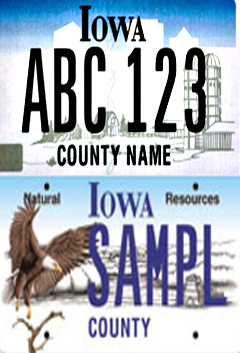 Observant Iowans will notice a subtle change in our license plates soon. Dena Gray-Fisher, spokeswoman for the Iowa Department of Transportation, says the light blue city and farm-scape will remain the same, but the dark blue numbers and letters will be replaced.

“Part of the reason that Iowa’s going to be changing to black ink on the numbers and letters is to make them more legible for law enforcement,” Gray-Fisher says.

“As technology is evolving, there are going to be electronic readers that law enforcement can use and look at the plates and automatically read them. The black ink would make it much easier for those readers to work.”

The devices already exist but she says it may be a few years before Iowa can afford to outfit all law enforcement vehicles with the cutting-edge gadgets. “The reader technology is an automatic process,” Gray-Fisher says. “It is going to read that plate, get all of the information about that registration — is it valid? — just from the technology. It would no longer be necessary for the officer to make a visual observation or to call in and check on that registration.”

She says some states are already to the point where they can eliminate license plates completely, in favor of just a window sticker, which is cheaper. “Certainly, the technology that allows for stickers to be placed in windshields, some states are using that now in their toll facilities as an automatic reader,” Gray-Fisher says.

“Iowa also has a reader system that’s used for commercial motor vehicles that allows them to bypass scales.” She says Iowa is not going to be issuing new licence plates to all motorists. The black ink will just be used on the new plates or replacement plates that are issued.

Wisconsin legislators are considering a plan to eliminate the annual registration stickers used on license plates. Supporters say it would save the state a half-million dollars a year in printing and mailing costs. Connecticut and New Jersey have already eliminated the stickers.