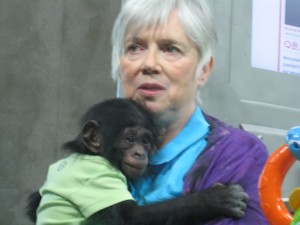 A scientist at Iowa’s Great Ape Trust has made Time magazine’s annual list of the 100 most influential people in the world.

Sue Savage-Rumbaugh has been studying the language skills of bonobos at the Des Moines facility since 2005. She recalls her reaction to the Time magazine news as one of disbelief. “That is wasn’t me, there was a mistake or it was an April fools joke,” Savage-Rumbaugh said.

Savage-Rumbaugh is joined on the list by President Obama, Speaker of the House John Boehner, Facebook founder Mark Zuckerberg, Oprah Winfrey and Justin Bieber – to name a few.

Savage-Rumbaugh has dedicated her life to learning about apes. Her work started nearly 35 years ago at Georgia State University. She calls the Time magazine honor “a recognition of what’s been done since 1972” by her and many others studying the intelligence and communication skills of primates. “I’ve had the opportunity to be a spokesperson, but someday the real spokesperson – when we make the real breakthroughs – will be (one of) the apes,” Savage-Rumbaugh said. She spoke with reporters Thursday while holding Teco, who was born at the Great Ape Trust last June.

Great Ape Trust founder Ted Townsend says Savage-Rumbaugh’s work being mentioned in Time magazine is a validation of what’s being done with apes in Iowa. “Certainly it’s an acknowledgment of the value of this research. Time magazine does not make these awards casually,” Townsend said. “They have done a lot of investigation of the science that’s accomplished here. So, it’s an acknowledgment that this is genuine science in a field that has been controversial, to say the least.”

The Great Ape Trust, located on Des Moines’ southeast side, is home to a colony of seven bonobos and two orangutans.