You are here: Home / Fires/Accidents/Disasters / Mapleton mayor says town is making progress in clean up

The top elected official in the western Iowa town that was heavily damaged by a tornado nearly two weeks ago says his community  will  recover and rebuild. Mapleton Mayor Fred Standa says the mood has improved as progress is being made to clean up the tons of debris from the town’s worst-ever disaster.

“We’ve got most of the curbside stuff picked up, trees, debris that all the property owners have pushed out toward the right of way,” he says, and there will likely be one more pick-up next Monday. Standa says the stacks of debris are mountainous — and still growing.

“We’ve got two sites and the tree pile is about four stories high and we’ve got a couple place we’re taking the debris and that’s probably two or three stories high,” he says. The tornado that struck on April 9th damaged or destroyed 140 homes and businesses in the Monona County town.

Stanza says FEMA officials were in Mapleton on Monday to do a comprehensive survey and red-labeled about 80 homes as unsafe to enter.

They went around in a school bus and identified all of the structures that were destroyed or damaged and will make a final determination on the damage within a few weeks to a month. 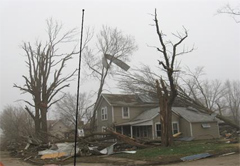 Work continues to repair damage from the Mapleton tornado.

Volunteers have streamed into the town from all across Iowa and several other states to help with the clean-up process. Stanza says he’s touched that so many people have contributed to helping them to rebuild, but he says Mapleton could still use one thing.

“Money,” he says, laughing. “We have a relief fund set up at both banks and I can’t tell you the dollar amount but I will tell you that it’s sizeable. Donations are being received from all the way across the nation, just unbelievable.” Stanza says many homes that weathered the storm are in need of repair. He says the community will survive.

“The attitude of the people is phenomenal, it’s what’s going to bring this community back together again,” he says. “We’ll rebuild and it’s already taking place. We’ve sold lots. We’ve seen some new construction going on. We’ve got a new house going up. It’s just amazing to see how much effort these people have put into this thing.”

About half of the town’s 1,200 residents were displaced by the tornado, which hit at about 7:20 on a Saturday night. The twister was categorized as an EF3, which carries winds between 136 to 165 miles an hour.

Photos courtesy of the Iowa D.O.T.