You are here: Home / Military / Funerals are today and tomorrow for Iowa Guard soldiers 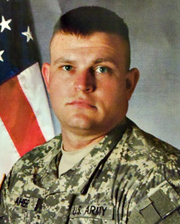 Two Iowa National Guard soldiers killed while on active duty will be laid to rest today and tomorrow.

Thirty-one-year old Sergeant Brent Maher of Honey Creek died April 11th when the vehicle he was riding in was struck by a roadside bomb in Afghanistan.

Twenty-one-year-old Specialist Donald Nichols of Shell Rock died two days later when a bomb exploded under his vehicle on another patrol in Afghanistan. 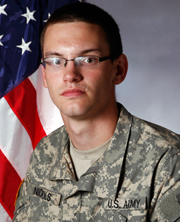 “Certainly when it comes to supporting service members in Iowa…there’s no comparison to other states, Iowa just does it so well,” Hapgood says. He says the expect a significant amount of people to attend the services for both Maher and Nicols.

The bodies of the fallen soldiers are returned home and Hapgood says their relatives determine how the services will be handled.

Hapgood says everything is driven by the family’s wishes and they do everything in their power to do whatever it is the family wants and to honor that soldier for them.

Hapgood says any Iowan can show their respect for the soldiers. He says simple things like standing as the funeral procession passes by or holding a flag are important to the families.

“Just simply to show your respect some visual way really is fantastic,” Hapgood says, “the families never forget that the day of the funeral when they see home many people come to show that they’re grateful to that family for what they’ve sacrificed.”

Maher and Nichols were part of a group of 2,800 Iowa National Guard soldiers deployed to Afghanistan in November of last year.