You are here: Home / Fires/Accidents/Disasters / Mississippi River expected to hit crest in Davenport

The Mississippi River in the Quad Cities is expected to crest at nearly 21 feet this evening. That would make it the 6th worst flood in the area’s history.

Flood stage is 15 feet. Despite the rising water, it’s business as usual for much downtown Davenport. Kyle Carter, with the Downtown Davenport Partnership, says city officials have made changes to mitigate flooding – including a combination of permanent and temporary flood walls.

“Over the years, the community’s been strategically removing a lot of buildings from the space that floods and replaced it with green space,” Carter said. “The pieces that have been built…basically have their own flood walls.” The Rhythm City Casino and the Union Station Visitor’s Center are both closed due to flooding, but Carter says that’s about it.

“The Front Street Brewery, which is actually on River Drive and has the river in front of it, is still open. They have access through the back of the building and the temporary flood wall is in front of their space and doing its job,” Carter said. LeClaire Park, located on the riverfront, is several feet under water and Carter says that may force officials to move a number of summer time events elsewhere. 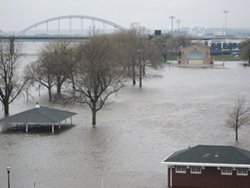 Flood walls surrounding a Minor League baseball stadium are working. Carter says fans can attended Quad Cities River Bandits games by crossing a new pedestrian walkway. “It’s pretty cool. You can go to a ballgame and basically feel like you’re on an island,” Carter said. “They tend to sell a lot of tickets just because people want say they were there and look over the edge of the stadium and see nothing but water.”

The Mississippi River crested at just under 23 feet in Dubuque earlier this week. Flood stage there is 17 feet. Major flooding is also forecast in Muscatine and Burlington.