You are here: Home / Military / Iowa soldier dies on rescue mission in Afghanistan

A spokesman for the Iowa National Guard says one soldier died and one was injured during while trying to save fellow soldiers during a rescue mission Saturday in Afghanistan.

Colonel Greg Hapgood says 32-year-old Staff Sergeant James Justice of Grimes died and 21-year-old Specialist Zachary Durham of Des Moines was injured as they helped the pilots of a downed helicopter in the Kapisa Province near the Pakistani border.

Hapgood says Durham is undergoing treatment at the Bagram hospital. Justice and Durham are part of the First Squadron 113th Calvary that is stationed at Camp Dodge. He says they don’t know what caused the helicopter to go down, and says it was a matter of timing that the two Iowa soldiers were called to respond.

He says the quick reaction force is something that is often appointed ahead of time for a particular day, and in this particular case the Iowans were available and in the closest proximity to the incident and were called upon to respond immediately. 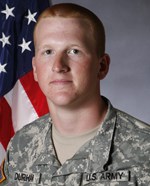 Hapgood says this area of Afghanistan is one that is particularly dangerous. Hapgood says there is a lot of activity anywhere in the Pakistani border area right now and a downed helicopter is a “magnet for insurgent or Taliban forces to have an opportunity to harm Americans or destroy important equipment.”

Justice was born in Manning and graduated from Irwin-Kirman-Manilla High School in 1997. He was a full-time guard member, and Hapgood says he had just joined the unit in March after they requested someone with his type of experience.

Sergeant First Class Kevin Schaefer was a friend of Justice’s and said he was ready to go overseas as soon as he was asked. “One of his goals was to get onto this deployment,” Schaefer said, “we would talk repeatedly in the office, that he wanted to get into the fight, and he was working toward that goal, and they needed him, and he jumped on it and said ‘take me’.”

Schaefer says he was a great guy who was a Hawkeye fan who liked to joke around. Schaefer says Justice’s nickname was “Juice” and everybody called him that. He says they had running joke between the two of them where Justice would come into Schaefer’s office and look at his Iowa State diploma and make a point of staring at it before saying “I knew there’s something wrong with you.”

Schaefer says he would in turn tell Justice something he couldn’t repeat in public and tell him to get out of his office. He says this happened on a regular basis. Justice is survived by a wife and three-year-old daughter.

He is the third Iowa National Guard soldier to be killed this month in Afghanistan.

The family of Staff Sgt. James A. Justice issued the following statement:
“James Alan Justice meant many things to every person he encountered. He was the funny best friend named “Juice” that could be counted on when needing to be cheered up; the uncle who always knew just what to say and when to hand out hugs; the son who was his parents’ pride and joy; the father who loved his little girl more than anything in the world and couldn’t wait to have more children; and the husband who loved to put a smile on his wife’s face. One thing James was to everyone was the ultimate soldier. He loved the military and he looked forward to every deployment. While we were stunned and extremely saddened to learn of his tragic death, we all take solace knowing that James died doing what he loved best: serving his country beside the men and women he revered and trusted.

Through his four tours of duty, James had many accomplishments but above all, he made life-long friendships. The outpouring of support and prayers during this time from friends, fellow Soldiers and strangers alike has been astonishing, but proved what we all knew: that James was a one-of-a-kind guy and deeply loved by all who had the opportunity to know him and serve with him. We would like to take this opportunity to thank the Iowa National Guard for the opportunities they have provided to James over the past 13 years. Additionally, we would like to acknowledge all of his fellow Iowa National Guard Soldiers both at home and serving overseas. May God be with you always.

We are sure that you can understand and will honor our request for family privacy at this time, as we are focused on working with military officials to return James’ body home for military service and burial. We thank you for your thoughts, prayers and kindness at this extremely difficult time. We are deeply saddened by our loss, but extremely proud of the honorable way he served America as a leader in the U.S. Army. We will remember him, his strength, his infectious sense of humor, his faith in God, and his love for his family, friends and country with great pride.”