You are here: Home / Recreation / Entertainment / Actor returns to Iowa for “Young Frankenstein” 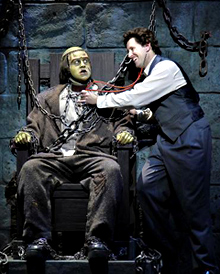 One star of the touring Broadway production of “Young Frankenstein” opening in central Iowa next week is coming home, sort of. The actor who plays Dr. Frankenstein lived in Des Moines in the mid-1990s when he was a member of Ballet Iowa.

Christopher Ryan says this will be his first time back in the Hawkeye State in about 15 years and he’s looking forward to seeing how Iowa’s capitol city has changed and grown. New York is home now, but he’s been on this nationwide tour for 17 months. Ryan is still enthusiastic, though he’s sung the same songs under the spotlight almost daily for the past 500-some days.

The musical-comedy about a man-made monster, set in Transylvania, is based on the Mel Brooks movie from nearly four decades ago. “It’s a great time to get away from the everyday, to go and sit down and enjoy and laugh for a couple of hours,” Ryan says. “That’s what this show really is about. It’s just a lot of fun.” He says Brooks and the other creators of the musical have taken the familiar lines from the original movie and put new spins on them.

“They have put together this musical theatre extravaganza,” Ryan says. “It’s just crazy. It goes from taking these moments in the film and taking it a step further, so it goes beyond what people expect when they walk in — if they have familiarity with the film — and if they don’t, it’s a great exposure to musical theatre.” Ryan, an Atlanta native, was born in 1974 — coincidentally, the same year “Young Frankenstein” was released in theatres. He says he saw the black-and-white cult classic for the first time when he was 12 or 13 years old.

Ryan says, “It wasn’t until probably half way through the film that I realized what comic genius it really was and wanted to watch it again and again.” Des Moines is the touring show’s next-to-last stop. Ryan says after the long adventure is over, he’ll take a much-needed vacation and then — start looking for his next job.

The show runs Tuesday through next Sunday at the Civic Center of Greater Des Moines.