It’s a spring makeover for the Iowa Lottery as they begin installing their first new computer terminals in 10 years. Lottery C.E.O. Terry Rich talked about the effort today outside a store in a West Des Moines mall that sells lottery tickets.

Rich says the rollout is going on now at the approximately 2,500 Iowa Lottery retailers across the state.

He says the terminals need to be switched out by the end of June so they can roll out their new software in July. Rich says several of the terminals have already been installed and they’re working out the bugs. He says with any new equipment they expect a few hiccups along the way and they will get those worked out. You’ll notice several features with the new terminals that weren’t available on the old machines — including the size of the tickets. 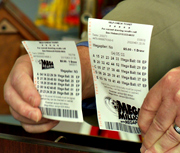 Rich says the new terminals issue bigger tickets that allow the games and numbers to be identified easier, and he says they are excited to give customers that convenience. The new terminals also include neon signs at many locations that will show the current jackpot amounts for games.

Rich says one new feature he particularly likes is a 17-inch video screen at the terminal that runs what’s called “Iowa Lottery in Motion.” He says it will tell and show customers how much they have spent or won when they come in to check or buy tickets. The new system will also allow the lottery to send out immediate alerts, like “Amber Alerts” and other things, to retailers.

With the old machines the lottery sent out alerts that came out as printed messages that the retailer would then tape up for customers to see. The machines will also feature a scanner where customers can check their tickets themselves to see if they have winners. Rich says they will pay a Georgia company $50-million over ten years for the new machines.