You are here: Home / Fires/Accidents/Disasters / Pocahontas tornado upgraded from EF3 to EF4 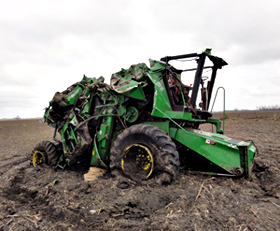 Originally, it was thought just 8 or 9 twisters hit the area. One of the tornadoes, which swept through a rural area west of Pocahontas, has been upgraded from an EF3 to an EF4.

An EF5 is considered the strongest tornado with winds greater than 200 miles an hour.  National Weather Service Meteorologist Jeff Johnson says EF4 tornadoes are rare – although a twister that hit near Sibley last June, causing 13 injuries, was rated an EF4.

One of the tornadoes that hit on April 9 damaged or destroyed 140 homes and businesses in the town of Mapleton. That storm was rated an EF3. Johnson says the EF4 in Pocahontas County covered a path of 3.2 miles. “It was based on a home that was destroyed west of Pocahontas,” Johnson said.

“It was swept cleanly from its foundation and disintegrated. That was the damage indicator that ended up being enough evidence to go with EF4, which is at least 166 miles per hour up to 200 miles per hour.” Two people were in the home, but were uninjured thanks to a basement “safe room” made from 8-inch thick concrete walls. The EF4 also damaged grain bins and farm equipment.

A combine was tossed more than 100 yards. “The combine probably weighed 30,000 pounds,” Johnson said. “Although we can’t rate a tornado specifically on that, it’s kind of more evidence to support the higher rating.” The 18 tornadoes on April 9 caused no deaths and the worst injury was a broken leg.

Iowa averages 48 tornadoes a year. To date this year, Johnson says around 24 tornadoes have been confirmed in the state.