Democrats say their state budget showdown with Republicans could last weeks, if not months, while Republicans say they plan to keep their promise to voters and approve a smaller state budget.

“This is a mistake to sacrifice middle class Iowans for the sake of piling up ever-larger reserve funds so you can make tax cuts to your rich buddies,” Gronstal says. 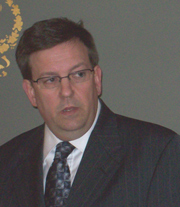 House Speaker Kraig Paulsen — the top Republican in the Iowa House — says Republicans have already met previous demands from Democrats and agreed to spend about $100 million more than their original target.

Last week Gronstal said his arm was tired from trying to hold out olive branches to Republicans. Paulsen dismisses this week’s complaint from Gronstal as mere hot air.

“It sounds to me like there’s some puffing taking place in the building right now,” Paulsen says.

Senate President Jack Kibbie, a Democrat from Emmetsburg, hears some puffing from Republicans, too.

“I haven’t heard no compromise on anything, you know,” Kibbie says.

Statehouse Republicans, including Governor Branstad, have agreed the state budget should be $5.9 billion next year.  That is about $240 million less than is available to spend.