An airplane that ushered in a new era for the U.S. military is now on display outside the Iowa Gold Star Military Museum at Camp Dodge in Johnston.

Vogt says the first versions of the jet were delivered in the spring of 1945, but it arrived too late in Europe to see any action against the Germans. The plane did see extensive service as a fighter-bomber in the Korean War. Vogt says it was the first jet used by a U.S. pilot to shoot down an enemy plane — that came in action in the Korean War. 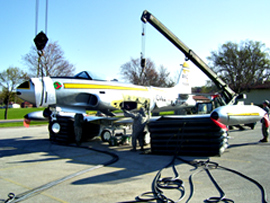 Workers put the F80C together at the Goldstar Military Museum.

Vogt says it was also the first jet flown by the Iowa Air Guard. He says squadrons in both Des Moines and Sioux City flew the aircraft in the 1950’s.

The Shooting Star served the Iowa Guard for about 10 years before it was replaced by the F-86 and F-100 in 1961 and 1962. The fighter wing in Sioux City was converted to the 185th Air Refueling Wing and refueling tankers in 2000.

Members of the 185th refurbished and painted this jet to reflect its Iowa history. Vogt says the plane is painted in the Iowa Air National Guard’s 174th Fighter Squadron scheme of the early 1950’s. The F-80-C is the latest addition to the expanded museum, which Vogt says is still a work in progress.

Vogt says they still have a long ways to go with a lot of money to raise, but he says they will have many of the exhibits installed by Memorial Day. The museum is open Monday through Saturday, 8:30 a-m to 4:30 p-m., except holidays.

Admission to the Museum is free. For additional information or questions about the Iowa Gold Star Military Museum, contact the Museum at (515) 252-4531 or visit their website at: www.iowanationalguard.com/Museum/Museum.htm