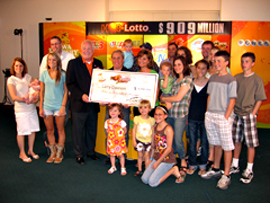 Larry Dawson and his family.

Larry Dawson brought his entire family to Iowa Lottery headquarters in Des Moines today to claim a $9.09 million Hot Lotto jackpot from the drawing on Saturday.

The 58-year-old Dawson learned he matched all six numbers for the big prize Sunday morning, but wasn’t sure how much he won until he called the Iowa Lottery.

“The voice mail said there was one winner, 9.1 million dollars and the ticket was purchased at Doc’s Stop in Webster City,” Dawson told reporters. “I jumped up and said, ‘that’s me!'”

Iowa Lottery C.E.O. Terry Rich asked Dawson about his nickname – Lucky Larry. It stems from his golf game. “I can hit the ball and it’s heading out of bounds, but it’ll hit a tree and end up in the fairway,” Dawson explained. “This is a lot luckier than the ball (not) going out of bounds.”

Dawson and his wife started playing the Iowa Lottery earlier this year after purchasing a book. “Kathy found this book three months ago about how to win a lottery, so…what the heck? Let’s try it just for fun,” Dawson said. “We just started playing for fun and all of the sudden, we hit.”

Dawson followed the book’s recommendations which include buying 19 plays for each drawing to cover all of the Hot Ball options in the game. Now that he’s claimed the jackpot, Dawson doubts he’ll keep spending $38 a week on Hot Lotto tickets. “I’m an odds guy and I don’t even know why we were playing, so probably not,” Dawson said.

Dawson plans to invest much of his prize money in his financial services firm. “We’ve had very little time to think about this, but I’m going to expand my business. That’s my main focus,” Dawson said. “I’ve enjoyed 31 years as a financial advisor, so that’s where most of it is going to go.” Dawson chose the immediate cash option, so after taxes, he’ll take home around $4.2 million.

“It takes a little pressure off of things, but as a whole, we don’t want (the money) to change our lives,” Dawson said. “We are very blessed, really fortunate and our family gets along so well. So, I really hope it doesn’t change my life.” Dawson and his wife Kathy have four grown children and 10 grandchildren. Three of Dawson’s children work at his financial services business.