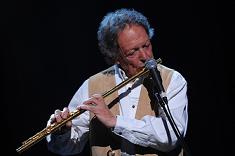 The man considered the Father of New Age Music is visiting southeast Iowa this week where he’ll perform a concert Sunday night.

Paul Horn recorded his first album of flute music in 1957. Now at age 81, Horn has some 50 albums to his credit.

Over the decades, the British Columbia resident has played with legends like Tony Bennett, Frank Sinatra, Nat King Cole and Miles Davis and spent time with the Beatles in India in the 1960s.

As for this weekend’s concert, he says there’s no set-list of songs. “I improvise, that’s what I do,” Horn says. “I know basically…but I just show up and play. What comes out, comes out.”

Horn has played his flutes in sacred locations around the world, including the Taj Mahal, the Great Pyramid of Giza and the Potala Palace in Tibet. While he’s been to Egypt, he says he’d like to further explore that continent and find more places to play his improvisational form music.

“My wife is from Africa and I’ve never been to Africa,” Horn says. “That’s one country that I’ve wanted to go to. Several times, it’s started out that way and something has happened. I guess that’s the only place I’d like to go that I have not yet gone.”

Music critics have labeled Horn’s sound as Jazz, Classical and other types, including New Age, which was a term essentially created for his particular genre-crossing style. Horn says his music defies being pigeon-holed, adding, “That’s what I like.”

Horn practices Transcendental Meditation and says he was among the very first TM teachers in the United States. He says it’s been a huge influence on his successes, his travels and his core being.

“I certainly would attribute TM, or meditation and TM is my technique, as being instrumental in changing the way I look at a lot of things in life,” Horn says. “It just sort of reorganizes your priority system. You start gravitating toward what you really should be doing in life.”

On Sunday, his venue is the Golden Dome at Maharishi University of Management in Fairfield. The concert begins at 7:45 PM. Learn more at: http://www.mum.edu/music/symposium