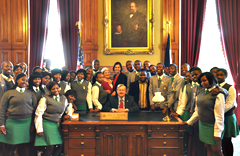 South African singers with the governor.

Thirty-one teenagers from South Africa who’re on a tour through the nation’s midsection performed at the statehouse Wednesday.

The teens stood in the rotunda of the first floor of the Iowa capitol building, their voices echoing on the marble floors, their music reaching into offices and even hidden hallways.

Estes, the Iowa native who went on to stardom in the world of Opera with his booming baritone voice, helped establish the school in 1997.

“They sang for the grand finale concert at the World Cup last summer in Johannesburg,” Estes said. “This was the only choir in the world invited there to sing…and they had a huge, huge, huge success.”

The choir is in Iowa for a few weeks and performed at Iowa State University’s commencement last weekend and they gave a concert in Oklahoma last night.  On May 15th, the troupe will headline a benefit concert at Wartburg College in Waverly. Tickets to that are $12. The concert at the statehouse today was free.

Estes joined the school’s principal to dance as the students sang, snapped their fingers and stomped their feet. Some of the South Africans in the crowd reacted with shouts and whistles. Governor Branstad heard the singing and came out of his statehouse office to listen.

“Don’t they have great voices?” Branstad asked the folks who’d gathered to listen.  The crowd of state workers and tourists applauded and cheered.  Branstad turned to the choir: “Thank you very much.”

Branstad invited the students into his formal office for a photo, then he gave them a tour of the areas of his office suite which are off-limits to the public.

Listen to the last 10 minutes of the concert: SimonEstesSingers