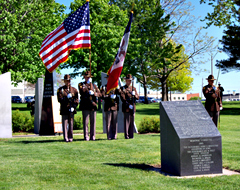 Eight names were added to the state Peace Officers Memorial today. State Trooper Dave Garrison read the backgrounds on the deaths of the eight officers at the monument north of the capitol.

Seven of the names were added by the memorial committee after reviewing the circumstances of their deaths.

The eighth name is that of Sergeant Eric Stein of the Keokuk County Sheriff’s Department who was shot and killed by a man on April fourth while on an investigation.

Stein’s family members were at the ceremony, as was Sheriff Jeff Shipley, who says there are good days and bad days.

Obviously we’ve never been through this before, of losing a man, we’re just trying to work through it,” Shipley says. Shipley says they’ve gotten great support from law officers across the state and says he is proud and knows Stein would be proud to be associated with the other officers. The sheriff says the death of Stein took more than an officer from their force.

Stein’s father Lonnie says the ceremony was tough so soon after his son’s death, but he says it is necessary to grow through to give recognition to his son and others. Stein says it’s hard to believe it has been just over one month since his son died. He says it seems longer than that and it has been hard getting everything done at home without his son’s help. Stein says it has been good to see so many people recognizing his son, and says it is something that is well deserved.

“He helped other people to the extent of leaving his own stuff go,” Stein said. Lonnie Stein says his nine-year-old granddaughter is doing well and handling the death of her father better than expected. This is one of several ceremonies across the state for Peace Officer Memorial Week.