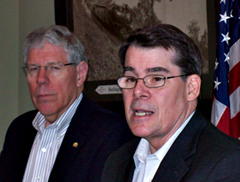 Senate Democrats say it will take outside pressure from Iowans to resolve the budget impasse inside the statehouse.

“We’ve been at it now for over 120 days and we’re not making much progress with the people in this building,” Gronstal said, “so it’s time for the people outside this building to call Governor Branstad and tell him starvation budgets for economic development and for education in this state are unacceptable to Iowans.”

Republican Governor has complained Democrats don’t realize he’s the governor now. Democrats object to a Republican plan to end the state’s Grow Iowa Values Fund which hands out economic development grants. And Democrats have  proposed a two percent increase in general state aid to public schools, while Republicans propose no increase. According to Gronstal, his meetings with Republicans aren’t going well.

“It’s time for Iowans to make the difference with the players at the capitol,” Gronstal said. “The people we’re talking to right now are not listening, so we need Iowans to convince them to listen.”

Governor Branstad and his lieutenant governor plan to embark on a “town hall meeting” tour of the state next week. Gronstal and Senate Democrats plan to do the same.

“We’re going to go out across Iowa and encourage Iowans to get involved,” Gronstal said today. “The only way you’re going to break this impasse isn’t amongst the players up here. We’re in the 130th day, almost, of the Session. It’s not going to be broken inside this building. It’s going to be broken by Iowans stepping up to the plate and calling the governor and telling him zero percent for local schools is unacceptable.”

Branstad told reporters earlier today — before Gronstal’s news conference — that it’s time for Democrats to “get serious” about budget talks.