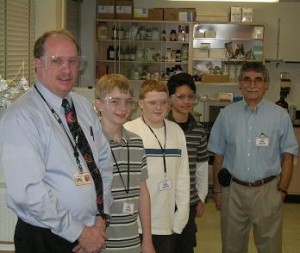 Middle and high school students from eastern Iowa are being honored with a reception this afternoon at the State Hygienic Laboratory in Coralville.

Lab scientists are working with students from Cedar Rapids, Iowa City and West Branch on science projects, but they’re a long ways from miniature volcanoes.

The lab’s Dr. Hector Ibarra says one project involved testing groundwater near the Eastern Iowa Airport in Cedar Rapids — and it found high levels of chemicals used to de-ice airplanes.

“The work that they do is serious and the kids take it seriously,” Ibarra says. “One student said, looking at information from a kid’s eyes creates a different way for adults to see what is really happening.”

Another project involved testing the water along roadsides in eastern Iowa for contamination from lead weights used to balance wheels — weights that often fall off.

Ibarra says, “That data was the final straw that allowed the (U.S.) EPA to begin to look at the process to mandate that the lead in wheel weights be eliminated.” While the projects have won awards, Ibarra says more importantly, two of them have already brought changes in state laws and one has the potential to bring about new federal environmental regulations.

This reception today is to recognize what he calls the next generation of scientists.

The reception runs from 4-6 PM today at the Hygienic Lab. University of Iowa President Sally Mason is expected to be among the attendees.