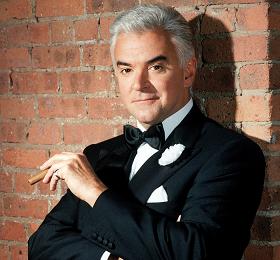 The actor most people know as J. Peterman from the T-V show “Seinfeld” will be in central Iowa next week as the star of a Broadway musical.

John O’Hurley has played all kinds of roles on everything from soap operas to “Baywatch” to “Spongebob Squarepants,” but he says slipping into the character of lawyer Billy Flynn in “Chicago” is far and above his favorite.

“That’s certainly the best entrance and exit ever written for a leading man on Broadway,” O’Hurley says. “The rest of the evening is just an absolute joy. It’s one of the great roles ever written and I consider it one of the five great musicals ever done on Broadway.”

The storyline is set in, well, Chicago in the 1920s and focuses on corruption in the criminal justice system and the concept of a celebrity criminal.

The 57-year-old O’Hurley started his acting career in daytime T-V dramas in the early 80s and has done stage, film, T-V, animation and a host of commercials. He won the coveted “mirror ball” trophy as the first-season winner on “Dancing With The Stars” and has global fame from his role on “Seinfeld,” which is now in syndication in 85 countries.

Still, he says, there’s nothing like putting on Billy Flynn’s slick suit and storming onto the stage in front of a live audience. This is a brief tour. The show opened last month in Michigan and just wrapped up in Detroit last week, with all sell-outs so far. He says nine cities will follow Des Moines, taking him into July.

After that, O’Hurley says he’ll be heading back to his home in southern California — to unpack and re-pack. He and his wife, Lisa, and their young son will take the summer off and head for their summer home in Vermont.

O’Hurley calls himself a New England boy. He was born in Maine and grew up in Connecticut. He went to college in Rhode Island and lived in Boston and considers himself a die-hard Red Sox Fan.

Besides his acting, O’Hurley has released “Secrets from the Lake,” a collaboration of his piano compositions with cellist Marston Smith. He’s also written two books, including a New York Times Bestseller, “It’s OK to Miss the Bed on the First Jump: And Other Life Lessons Learned from Dogs.”

The musical “Chicago” opens next Thursday for a four-day run at the Civic Center of Greater Des Moines. For information, visit: www.civiccenter.org