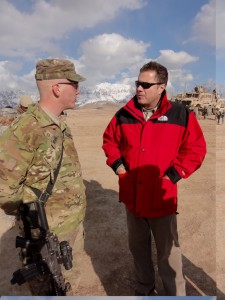 An Iowa congressman is calling for the withdrawal of American troops in Afghanistan “as quickly as possible.”

Democrat Bruce Braley of Waterloo spoke with reporters today after voting for an amendment to bring the troops home. “After giving a lot of thought and careful consideration to our ongoing commitment in Afghanistan, I have reached the conclusion that it’s time for us to start bringing our troops home,” Braley said.

The U.S. House narrowly defeated the amendment that would’ve required the Secretary of Defense to craft a plan to speed up the transfer of military operations in Afghanistan. Braley says America’s justification for going to Afghanistan is “no longer valid.” He says U.S. troops have killed or captured most of the al-Qaeda leadership, including Osama bin Laden, and captured many individuals accused of aiding and harboring terrorists.

Braley says he based his decision on conversations with top generals in Afghanistan and Iowa troops in the region. Braley says the military has accomplished it’s “main objectives” in Afghanistan, but U.S. troops are still making tremendous sacrifices. “There have been nearly 1,600 U.S. fatalities in Afghanistan…16 from Iowa who’ve died since 2001, including three in the past three months,” Braley noted.

Around 2,800 Iowa National Guard soldiers were deployed to Afghanistan last year and are expected to return in July.

Braley is the first member of Iowa’s delegation in Washington, D.C. to call for a troop withdrawal. Iowa Senator Tom Harkin said earlier this month he hoped bin Laden’s death would “accelerate the process of getting our troops out of Afghanistan.”