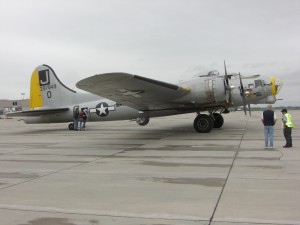 With Memorial Day just ahead, a hands-on history lesson will be flying into two Iowa cities during the holiday weekend. Scott Maher, with the Liberty Foundation, says two very rare aircraft from the World War Two era will be making stops in Council Bluffs and Des Moines.

“The Liberty Belle is one of the B-17s made famous by the 8th Air Force, which was kind of the work horse of World War Two,” Maher says. “This particular airplane never saw combat. It was built at the end of the war, sold for scrap for $2,000 and wound up being torn in half by a tornado. We recovered the airplane 13 years later and spent another 13 years and $4,500,000 to restore it.” 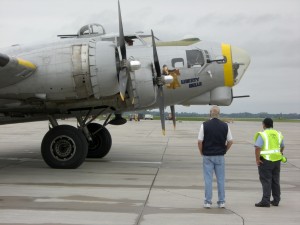 Maher says restoring the B-17 was a labor of love. “Everything inside and outside the airplane is original down to the bomb site in the nose, which works,” he says. “Folks can certainly dial in a target as we’re flying.”

The historic B-17 warbird will be in Council Bluffs on Saturday and Des Moines on Sunday. “It’s one of only four still flying worldwide that folks can come out and experience,” he says. “We travel the country and allow folks to come out, touch the past and fly through ageless skies. We’ll be at the Council Bluffs Airport on Saturday with flights from 10 to 2 every hour on the hour and for those who don’t want to fly, it will be on the ground for tours from 2 until sunset and they can spend as much time in and around the airplanes as they like.” 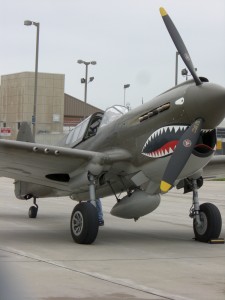 Along with the Liberty Belle, a P-40 Warhawk will be on display. It’s a combat veteran that was in the Aleutian Islands in 1942. It’s thought to be the only two-seat P-40 in existence that’s still flying.

Maher says it’s exciting when veterans who were part of history come and visit the Liberty Belle.

“We had a veteran come out who was a ball turret gunner a few weeks ago,” he says. “It was 100 degrees. He wanted to go out and look at the ball turret. Twenty minutes later, I looked over at him and he was on the ground, flat on his back. I was thinking the heat had gotten to him and I grabbed some water and said ‘Sir, are you okay?’ He said “Yeah, I bailed out on my 23rd mission and this is the last thing I saw,’ as he was lying down and just looking up at the airplane.”

Maher says we’re losing 15-hundred World War Two veterans every day and with each death goes another story of courage and valor. He says the Liberty Foundation exists for three primary goals: to honor our veterans, to teach current and future generations about the high price of freedom, and to preserve aviation history. Learn more at: www.libertyfoundation.org