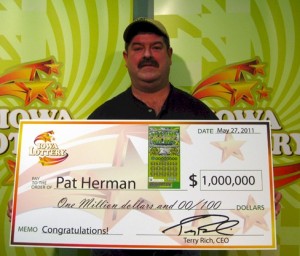 A Mason City man won’t have any problem paying for a new pickup he recently ordered. Pat Herman stopped by Iowa Lottery headquarters in Des Moines today to cash in a “Lifetime Riches” instant scratch ticket worth $1 million.

Herman bought the $20 ticket on Tuesday at a local convenience store, scratched the ticket the parking lot and then went back inside to verify it was a big winner. “The (cashier) about fell over when he checked it. He was so excited. It was unbelievable,” Herman said.

Pat Herman’s first phone call after learning he’d won was placed to his brother, Steve, who lives next door. Steve says he bought a “Lifetime Riches” ticket at the same convenience store Monday night. He didn’t win, but his brother bought the next ticket on the roll the following morning.

“I saw (Pat’s) ticket and I was looking at it and I knew I’d bought one the night before,” Steve Herman said. “And his was number 11 and I knew mine was number 12. At least it was him and not someone else.”

Pat Herman, who turned 51 on Monday, said he’ll use some of the winnings to pay off a new Ford pickup he ordered before learning of his good fortune. The welder at a Mason City manufacturing plant plans to keep working and save for an early retirement.