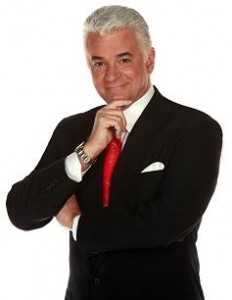 The actor who won worldwide fame for an oddball role on the hit television show “Seinfeld” says he’s enjoying his life to the fullest and will continue tackling new challenges on- and off-screen.

John O’Hurley is best known as J. Peterman, the eccentric globe-trotting catalog sales company founder on “Seinfeld,” and he’s pursuing real-life adventures every year since the “show about nothing” went off the air in 1998. Whether it’s before a T-V or film camera — or a live audience — O’Hurley says he loves performing.

“I stopped being nervous about three years into my career in the mid-’80s when I just decided I was going to have fun doing what I was doing,” O’Hurley says. “I promised I was going to surprise myself sometime during my performance. I made that promise to myself and I’ve kept it ever since. It takes all the fear out of it. It makes it much more fun. I just go onstage with the idea of leaping and knowing that the net will appear.”

In a telephone interview with Radio Iowa from his home in southern California, O’Hurley says he continues to diversify himself and his resume. Next week, he’ll be in Des Moines, playing the role of slick lawyer Billy Flynn in the touring Broadway production of “Chicago.”

O’Hurley is an actor, a singer, a pianist, a financier, a best-selling author, and reluctantly, a dancer.

The 57-year-old says it’s nothing short of a miracle that he won the premiere “mirror ball” trophy on the nation’s top-rated television dance program in 2005.

“That was God’s great mistake when I ended up on ‘Dancing With The Stars’ and ultimately won that first season,” O’Hurley says. “That was not my bailiwick at all. Between acting and singing, I’ve trained for both and was trained in opera. That’s a skill set I feel comfortable with and the same as an actor, I was classically trained, so I feel very comfortable with that as well.”

A few years back, People Magazine named the silver-haired O’Hurley to its list of sexiest men alive, which he says was a rather dubious honor. He quips, “I think in my case, that year they were weighing in more heavily on the ‘alive’ part than the sexy.'”

His list of guest star appearances on T-V is astounding and wide-ranging, with roles on “The X Files,” “Baywatch” and “Murder She Wrote,” while O’Hurley is currently doing the voices of several animated characters on kids’ shows, including King Neptune on “Spongebob Squarepants.”

He says he’s recognized frequently wherever he goes, but for different reasons.

While that audience is in the tens of millions daily, to see O’Hurley onstage in central Iowa with a considerably smaller crowd next week, visit: www.civiccenter.org