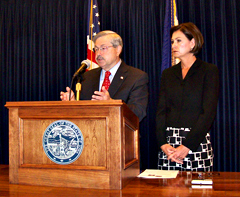 Branstad and his fellow Republicans in the Iowa House have been unable to strike an agreement on state spending with Democrats in the Iowa Senate.

“We have plans for all types of emergencies and this would be no different,” Roederer says. “But we’re not focusing on that. We’re focusing on getting the budget done.”

Democrats in the Senate are urging Branstad to release more details to the public about what would happen if state government does shut down.

“The governor has emergency powers whenever there’s an emergency. I am not anticipating an emergency,” Branstad says. “I will deal with it if I have to, but I think they need to get serious about doing the job and I have cancelled my trip so I will be available to do whatever I have to do.”

Branstad has canceled his participation in an 11-day trade mission to China and South Korea in mid-June so he can stay for budget negotiations.

“There’s been virtually no action in the legislature for the last several weeks,” Branstad says. “I intend to stay here and hold their feet to the fire because I believe the people of Iowa deserve a budget htat is sustainable for the long-term and one that protects the taxpayers against a massive tax increase.”

Democrats in the Senate sent Branstad a letter this morning, urging him to strike a “middle-ground” compromise on the budget that would include proposals that neither side supports 100 percent. Branstad’s not budging, though.

Branstad says Democrat are making “reckless and irresponsible” demands for additional spending in education and other areas. Lieutenant Governor Kim Reynolds likens Democrats to children demanding their parents spend money on frivolities that should be spent instead on the family’s mortgage. Reynolds will lead the state trade mission to China and South Korea.