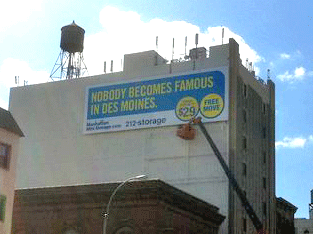 A giant billboard in New York City is poking fun at Iowa. The sign states “Nobody becomes famous in Des Moines.” You might assume it’s an ad for Broadway or even New York City’s chamber of commerce. It’s not.

The ads were placed by Manhattan Mini-Storage, which uses the slogan “we help New Yorkers live big lives in little places.” The billboards are designed to extol the benefits of living in New York despite the lack of closet space.

Lauren Burt is the director of media and marketing at the Greater Des Moines Partnership. “I think they’re trying to promote that they’re greatest…but I have to say that I don’t think that Des Moines belongs on that sign,” Burt said.

Although it may be warranted, Burt says Iowa’s capital city is not planning any retaliatory billboards. “You know I think we could have a lot of fun with that,” Burt said with a laugh. “But, I’m a firm believer in positive marketing. There’s too much negativity out there anyway. So we have great things to promote.”

Calls placed to Manhattan Mini-Storage went unreturned. Burt says she’s stumped why they chose to dump on Des Moines. “We’re number one in so many different national rankings for business and careers…and that’s really the truth, not billboards for storage space,” Burt said.