You are here: Home / Fires/Accidents/Disasters / May goes down as stormy with unpredictable temperatures 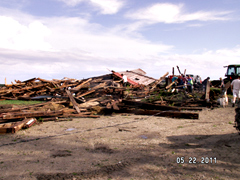 The month of May in Iowa was marked by severe storms and drastic swings in the temperature. State Climatologist Harry Hillaker says 13 tornadoes touched down last month across Iowa.

“Which is actually average for us this time of year,” Hillaker said. Eight tornadoes hit parts of western Iowa on May 11th.

The town of Lenox sustained the most damage, but no one was killed or seriously injured. Five more tornadoes ripped through rural areas of northeast and east-central Iowa on May 22. Iowa’s already recorded 37 tornadoes in 2011.

“That already exceeds the total for last year and (2009),” Hillaker said. “The normal annual total is 48, so we’re not quite to that point.” In 2008, Iowa recorded 120 tornadoes that killed 13 people – primarily in Parkersburg and New Hartford and at a Boy Scout camp in western Iowa’s Harrison County. Hillaker says Iowans should remain on alert for severe weather in the weeks to come.

“June, on average, is our busiest month of the year for tornadoes in Iowa,” Hillaker said. The statewide average temperature in May turned out to be “normal,” according to Hillaker, but the month included extreme heat and cold.

The hot spot was Jefferson – which hit 100-degrees on May 10. Just one week earlier, on May 3, the coldest temperature of 20-degrees was recorded in both Spencer and Sibley. Hillaker says the statewide average rainfall was 5.2 inches. Normal rainfall for May is 4.25 inches.