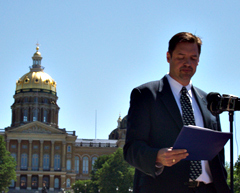 A Republican who used to be a state senator wants to spark a conversation within his party about “marriage equality.”

Jeff Angelo of Ames lived in Creston when he was a legislator — and during his 12-year tenure in the state senate he lead an effort to ban gay marriage in Iowa. But Angelo, who describes himself as a conservative Republican, says his thinking on the issue has evolved.

“I’m going to make the argument to conservative Republicans that it’s actually in line with our values to be supportive of marriage equality,” Angelo says.

“I believe that some folks get so passionate about keeping marriage exclusive to a man and a woman that they’re stomping all over principles that normally they would defend in the public square: individual freedom, limited government, the pursuit of happiness.”

Angelo attends an evangelical Christian church in Ames which will only marry opposite sex couples, but he says it’s time for Republicans to rethink their opposition to civil marriage ceremonies at “city hall” for same-sex couples.

“What I’m doing is calling conservatives back to their conservative roots and saying that it is in line with our conservative principles to support marriage equality,” Angelo says.

Angelo’s new group is called Iowa Republicans for Freedom, a name quite similar to Iowa for Freedom, the group formed last year by anti-gay marriage activists who worked to defeat three Iowa Supreme Court justices up for a retention election because the three had joined the court’s 2009 ruling on gay marriage.  Angelo told reporters today he wasn’t trying to be “clever” with the name of his group.

“There’s another Republican voice on this issue besides the Republicans who support exclusive man-woman marriage,” he said during a news conference in Des Moines.

Angelo intends to travel around the state to encourage Republicans to attend next year’s Iowa Caucuses and push the G.O.P. to change its platform, a document that now calls for a constitutional amendment that would ban gay marriage in Iowa.

“It’s easy to feel so passionately about an issue that you don’t look at it objectively, but what happens when the individual freedom we’re discussing is gun control or universal health care?” Angelo asked.  “We need to set aside the rhetoric and look at the slope on which we’re starting to slide.”

Angelo is holding news conferences in Des Moines, Cedar Rapids and Davenport this week to kick off his effort and he told reporters this morning that his new group currently has about 50 members. Angelo’s not sure he could win election to the state senate now after having “come out” and taken a stand on the issue, but he predicts some Republican officeholders will begin to publicly support same-sex marriage as more polls show the public’s accepting it.

“For those that I talk to in meetings that quietly say, ‘You know, I really am favorable, but I’m just afraid to come out,'” Angelo said, “those folks will when the numbers keep shifting.”

Angelo jokingly calls himself “Mr. Lightning Rod” by taking this stand now. And Angelo conceded it’s unlikely the Republican Party will nominate a presidential candidate in 2012 who supports same-sex marriage. Angelo, though, said he’ll still vote for that candidate, as Angelo opposes what he called “single-issue litmus tests” in his party.