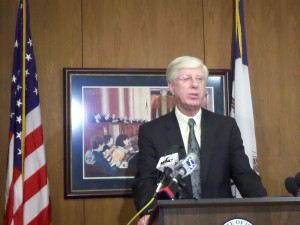 An Arizona company is facing a lawsuit in Iowa for making false claims to solicit funds in the name of helping people with disabilities. Iowa Attorney General Tom Miller filed the lawsuit today against Americans With Disabilities, LLC in Polk County District Court.

Miller says, on March 8, a solicitor with the company called a phone number once associated with an older Iowan. The number was being utilized as an undercover recorded phone line maintained by the Attorney General’s Consumer Protection Division.

Miller says the solicitor lied about several things – including a claim that he served in the Vietnam War, was exposed to Agent Orange and was now blind. “He said he would use the money…to get a guide dog,” Miller said. “Which we say was also a misrepresentation because he wasn’t blind.”

The solicitor, later identified as Jeffrey Balke, also claimed to be a native of Dubuque and said he had a daughter who died of cystic fibrosis. Miller says Balke, responding to a subpoena, admitted he never served in Vietnam, wasn’t from Iowa and his three children are grown with no health problems.

Balke was selling products by phone, including $45 tins of cookies, claiming the money would help disabled people. Americans With Disabilities is a for-profit company based in Phoenix. “There seem to be a group of them in the Phoenix area that show up from time to time,” Miller said of questionable phone solicitors. “So, we’re trying to send a message to Phoenix that we’re here and watching and we’re going to file lawsuits when necessary.”

The lawsuit also names Dale Sieck, the owner of Americans With Disabilities. Miller says it’s unclear how many Iowans may’ve been targeted by the company.