You are here: Home / Business / Budget battle in court of public opinion (audio) 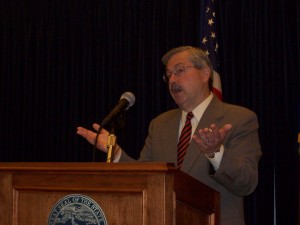 Republicans and Democrats are still waging their battle over the budget in the court of public opinion.

Republican Governor Terry Branstad is embarking on a 43-city tour of the state to tout a budget plan Republicans in the Iowa House plan to pass this week, while Democrats in the Iowa Senate are hosting “budget hearings” at the statehouse to provide a public forum for Iowans who dislike the GOP spending plan.

Branstad says he’s glad Senate Democrats are “back in town” for the budget hearing, but he’s ridiculing their event.

“I think it’s a little late to be holding budget hearings. Those things usually are done in January and February. Now’s the time for action. The fiscal year ends the end of June. We still have time, but it’s time to get serious.”

Democrats in the Senate want to spend $65 million more in the coming year on K-through-12 public schools, plus they want to dedicate more money than Republicans want for community colleges and the state-supported universities in Ames, Cedar Falls and Iowa City.  Schoenjahn suggests now isn’t the time to skimp on schools.

“Iowa is in a strong financial position,” Schoenjahn said. “The Senate has passed a responsible and balanced budget which has a projected $400 million surplus; $600 million in reserves and we’ve also maintained our triple-A bond rating and there’s no real budget crisis to excuse the deep cuts by the governor and Republican House on education at all levels.”

Branstad disputes those numbers and Branstad says he learned long ago that personally trying to negotiate a compromise doesn’t work when there’s this kind of an impasse.  Getting Iowa voters to pester legislators is the answer, Branstad says, so that’s why he’s going on his 43-city tour this week.

At each stop on his tour, Branstad plans to hand out a list of the home phone numbers of each Democrat in the Iowa Senate, urging Iowans to telephone them.

Branstad says Republicans have made some “legitimiate” compromises Democrats have sought by, for example, pledging to spend more on K-through-12 schools in the academic year that begins in the fall of 2012 as well as agreeing to spend more money for community colleges.

Republicans and Democrats in the House, meanwhile, are holding committee meetings today to review the massive bill the GOP unveiled last week that outlines the entire state budget for next year, as well as for the following year.  The House Ways and Means “tax-writing” Committee is expected to add the GOP’s property tax reform plan to the bill.  Leaders plan to have the full, 100-member House debate the legislation on Tuesday.

Listen to Branstad discuss his barnstorming tour in the second-half of his weekly news conference; audio posted at bottom of this Radio Iowa story.