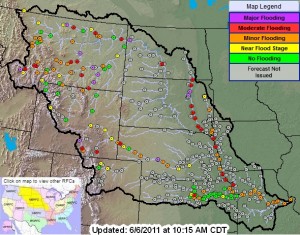 Iowa’s governor says the predicted flooding along the Missouri River will be the worst he’s seen in his lifetime. Governor Terry Branstad says it’s likely Interstate 29 will be closed.

“There’s some very low areas south of Council Bluffs where the DOT thinks I-29 will need to be closed,” Branstad says. “But it’s not closed as of now.” Traffic would be detoured on Highway 71, if that section of Interstate 29 goes under water.

Officials say flood prediction maps developed by the Army Corps of Engineers indicate the Missouri River may flood as much as two miles into Iowa at some locations, although the depth will vary widely, too.

“In terms of waiting ’til the last minute, obviously you’ve got to consider whether the roads are going to be open as well,” Branstad says.

The governor isn’t sure about the duration of the flood estimates, however, as some predictions indicate flooding will last for a couple of months.

“I’m not sure you can just absolutely, with certainty, predict the length that it’s going to be. I mean, I’m kind of surprised that they’re saying it’s going to be this long a period of time, but this is a pretty unusual situation,” Branstad says. “This is the worst flooding that I can remember on the Missouri River.”

Branstad is scheduled to be in Council Bluffs today, but he won’t be touring the river. He’ll be there for a political event.

“One of the concerns in Council Bluffs is it is protected by a levee, but there’s concern about, you know, reinforcing that levee and making sure it holds,” Branstad says. “…That’s a community where there’s a large number of citizens that live in the area that’s protected by the levee.”

The governor says it appears officials in the cities of Council Bluffs and Sioux City have “impressive” plans in place to deal with the situation.

“Each of the counties is working diligently to try to be as well prepared as possible (with) great cooperation from the private sector,” Branstad says. “MidAmerican Energy, they have significant power plants both south of Sioux City and also in the Council Bluffs area.”  The State of Iowa loaned earth-moving equipment to MidAmerican to build earthen flood walls around those plants.

Derek Hill, head of the Iowa Homeland Security and Emergency Management division, says the Army Corps of Engineers is erecting a “secondary” retaining wall to try to protect the southwest Iowa town of Hamburg.

“It will probably be a semi-shaped wall of earth that will help protect the city,” Hill says.

Hill and Branstad held a media briefing at the statehouse this morning, but the governor’s emergency management chief knew nothing of the new Missouri River levee breach reported early this morning south of Hamburg. An emergency shelter has been set up in Sidney for Hamburg residents who are under a mandatory evacuation order, but Hill says no one used the facility overnight.