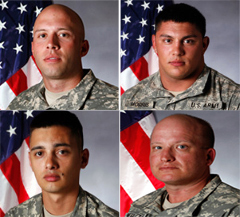 The Iowa National Guard says four soldiers were injured when their vehicle was struck by a roadside bomb Tuesday in Afghanistan.

Ennor was flow to Germany for treatment, while the other three were being treated in Afghanistan. Their condition reports were not available.

Three of the soldiers are from an Iowa City infantry company and the other from Waterloo’s Headquarters command of the 1st Battalion, 133rd Infantry, 2nd Brigade Combat Team, 34th Infantry Division.