You are here: Home / Fires/Accidents/Disasters / Hole develops in Hamburg levee 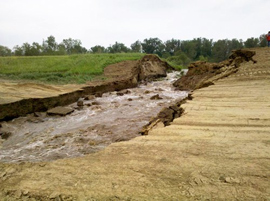 Water is coming through a hole in this levee at Hamburg.

A levee along the Missouri River failed this morning in northwest Missouri, prompting a flash flood warning for the southwest Iowa town of Hamburg.

“We were down getting ready to ring some sand boils and actually watched the breach occur,” Sturm said. “This time, instead of sealing itself off, it tended to blow itself out.”

Floodwaters started gushing through the gap – which widened to more than 30 feet in less than an hour. “There really wasn’t anything we could do to stop it at that point,” Sturm said. “We pulled everybody back to start preparations for sealing off the town with the secondary levee.” The breached levee is located a several miles from Hamburg, so it could be Tuesday before the floodwaters reach town.

But, National Weather Service hydrologist Dave Pearson says the gap in the levee is growing bigger every hour. “So, as that breach becomes wider, the amount of water moving in increases and that decreases the time it takes to get to the interstate and Hamburg,” Pearson said. A spokesperson for the Iowa Department of Transportation says a 20 mile section of Interstate 29 will be closed from Iowa Highway 2 to south of Rock Port, Missouri.

The I-29 closure is expected today or tomorrow. Pearson says flood predictions for Hamburg remain unchanged. “At no point did the Corps of Engineers think this portion of the levee would hold. It was a foregone conclusion that it was going to fail. it was a matter of when, not if,” Pearson said.

A secondary levee was built last week to protect Hamburg. It’s not clear if the structure will be strong enough to protect the town of about 1,100 people from the deepening floodwaters. Hundreds of people have already fled their homes and businesses.

The Army Corps of Engineers projects, if the secondary levee fails, 8 feet to 10 feet of floodwater would pour into the southern part of Hamburg.