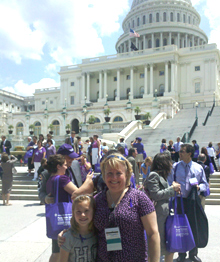 Kelly Barber and her daughter Megan.

Seven Iowans are among hundreds of people who are in Washington, D.C. today urging Congress to direct more money toward research of pancreatic cancer. Kelly Barber is advocacy coordinator for the Des Moines chapter of the Pancreatic Cancer Action Network.

“So, I need to be a voice for him, for the other people who are currently fighting pancreatic cancer, as well as those who’ve yet to be diagnosed,” Barber said. The number of Americans who will be diagnosed with pancreatic cancer is projected to increase by 55% over the next 20 years.

Members of Congress are being urged to pass the Pancreatic Cancer Research and Education Act. “The bill is critical to help (develop) early detection methods,” Barber said. “Usually, when people are diagnosed, it’s already in the late stages.” Three out of four pancreatic cancer patients die within the first year of diagnosis.

Barber is asking Iowans to call the offices of Iowa’s Congressional delegation today and urge them to pass the Pancreatic Cancer Research and Education Act.