You are here: Home / Fires/Accidents/Disasters / Flood waters moving slower toward Hamburg than predicted 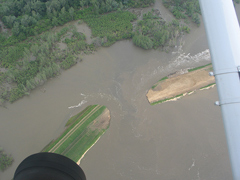 Officials now say the floodwaters approaching the southwest Iowa town of Hamburg may not get there until tomorrow.

The Army Corps of Engineers had initially predicted the water, which broke through a levee along the rising Missouri River Monday, would reach Hamburg today.

Officials say the water is moving slower than originally expected through thousands of acres of fields.

A secondary levee is in place just outside of Hamburg. Corps officials believe it’ll hold back the water, but if it fails, parts of Hamburg could be covered by as much as 10 feet of water for months.

Many of the town’s 1,100 residents have already evacuated. The Iowa Department of Transportation reports the flooding finally closed a nearly 30 mile stretch of Interstate 29 this afternoon. The closure extends from Iowa Highway 2 to the U.S. 136 interchange near Rock Port, Missouri. Governor Branstad is scheduled to visit Hamburg this evening.

Crews have set up water pumps to ensure the main road leading to Omaha’s airport remains open. The airport in Lincoln, Nebraska, would be able to accept flights bound for Eppley Airfield in Omaha if the airport were to close, but Steve Coufal, executive director of the Omaha Airport Authority, says that’s not necessary.

“As of right now, we believe that we will continue to keep operations here at Eppley and manage things as they occur,” Coufal says. The airport sits along the west side of the Missouri River. Coufal says seven engineering firms are working with the airport to protect against the flood waters.

The levee is being checked every two hours and Coufal expects all the airport’s flood fighting efforts will work. “From the latest information we have based on Corps projections, we believe we still have adequate protection,” Coufal says. Sandbags are stacked around the Omaha airport’s terminal to protect it from any temporary flooding that may occur during heavy rains.

The Omaha airport sits about four miles northeast of downtown Omaha. About 90 flights depart from the airport each day. Over four-million passengers used the Omaha airport in 2009, the most recent year for which passenger data is available.