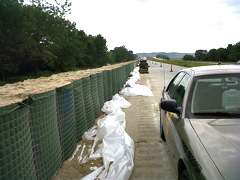 Water has now reached this new levee built in Hamburg.

The secondary levee built to protect the southwest Iowa town of Hamburg is now being put to the test.

Floodwaters that broke through a levee on the Missouri River Monday morning finally reached Hamburg early this morning.

Hamburg Fire Chief Dan Sturm said the water had already climbed a few feet up the secondary levee by mid-morning.

“I feel pretty confident with the structure itself,” Sturm said of the levee. “It wasn’t really put in like a temporary levee. It was built more like a permanent levee with the specs, the way the dirt was put in and packed. It was put in to last.”

Sturm says the secondary levee was constructed with different materials than the structures lining the Missouri River. He says the river levees have a “sand core” with a dirt overlay, while the levee near Hamburg is “solid dirt, packed in tight.” The Army Corps of Engineers built the levee three feet higher than the floodwaters are projected to rise. The water’s expected to stay at that level for at least two months.

If the secondary levee fails, much of Hamburg would be buried under 10 feet of standing water. Sturm admits the 1,100 residents of Hamburg are frustrated and worn out. “But we still have a pretty good community spirit here and we’ve pulled together well. We’ve been through this before and we’re fighting this thing to the end,” Sturm said.

The Corps and private contractors continue to work on the levee, covering the structure with plastic to battle erosion. Sturm says the floodwaters crawled through thousands of acres of farmland to reach Hamburg. “It’s quite a sight to see this stuff move through,” Sturm said. “It’s not something you see everyday…it’s not something you want to see everyday, of course. But, I guess it’s history. There’s just a vast amount of water down here and there’s a vast amount of water yet to come down.”

Around six businesses and dozens of homes have been vacated in Hamburg, which is also facing a flood threat to the east. The Nishnabotna River has been rising after recent heavy rains.