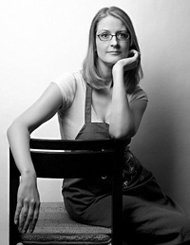 Imagine being able to conjure the spirit of a long-dead loved one just by creating something from one of their handwritten recipes.

That’s part of the premise of a new book from northeast Iowa native Jael  McHenry, who will be in the Hawkeye State this weekend to promote her debut novel, “The Kitchen Daughter.”

The story follows a young woman with Asperger’s Syndrome. “I wanted to draw on my own love of cooking to make my writing feel more immediate and real,” says McHenry.

“I decided just sort of through inspiration that what would happen is that when she cooked from these family recipes, the ghosts of the people who wrote the recipes would appear to her and either help her — or not — as she went to the stove for comfort.”

The first page of each chapter features a note card-style recipe for a different dish, dessert or drink. “One of my hopes is that the book will get to book clubs and that people will cook from the recipes and bring the food to the meeting so they can talk about the book and eat the food from the book together,” McHenry says. “I didn’t want to have any recipes in there that weren’t going to turn out so I developed all the recipes and I tested all the recipes.”

She says she’d just made a batch of “Midnight Cry Brownies” from the book for her own book club’s snack. McHenry grew up in Janesville and now lives in New York City, blogging about food and cooking at the Simmer blog (http://simmerblog.typepad.com). Her first novel recently got a glowing review in Oprah Winfrey’s “O” magazine and McHenry says she’s long worked to get to this stage of being a published author.

“It’s absolutely fantastic,” McHenry says. “It’s really amazing and it still doesn’t quite feel real. The book’s been out for two months now and I still get surprised when I go into a store and see it there. It feels like I snuck it in somehow.” An avid user of Facebook and Twitter, McHenry says social media and networking helped to spark the book’s growing popularity.

“Twitter is a lot of fun for me,” McHenry says. “It’s like being part of a really, really large party conversation. I do it partly for fun and then it does help get the word out. Every reader needs to find out about books and everybody has their own way of figuring out what they’re going to read.

Word of mouth is really the only thing that sells books.” McHenry will be doing a reading and book-signing on Saturday at 2 P.M. at the Waterloo Public Library. For details, visit: www.thekitchendaughter.com