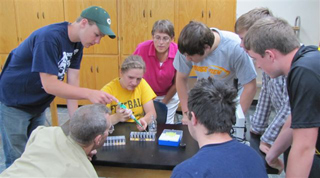 When the space shuttle Atlantis launches on its final mission next month, it will be carrying aloft a science experiment assembled by students from northwest Iowa.

Wheeler says, “They’re a little organism that only gets a certain number of cells and they’re going to check if microgravity has any effect on the size the cells can get.”

While the shuttle is in orbit, the astronauts will set the process in motion as the students simultaneously grow their own water bears using identical techniques. They’ll compare the two sets of creatures after the shuttle lands to see what impact the weightless environment may have had on their growth. Wheeler says water bears are tough critters.

“If you look at them under the microscope, they look like a six-legged little bear,” Wheeler says. “They’re virtually indestructible. They’ve had them in space before and they’ve even put them in the vacuum of space and they survived.” She hopes being involved in the project will spark her students to pursue careers in science. As an additional incentive, the entire group will be going on a field trip to the Kennedy Space Center in Florida to witness the scheduled launch on July 8th.

“They tell us it’s 26 hours on a bus,” Wheeler says. “We’ll get to go into a VIP place down there at the launch site so that we have a better view and we’ll get to watch our experiments be launched.”

Knowing shuttle launches are frequently delayed, she says she just hopes if they get all the way to Florida for the liftoff, that it goes as scheduled. Ridge View High is among only 11 schools in the nation with experiments aboard this final shuttle mission and it’s the only one from Iowa.