Storm damage in the southern Iowa town of New Sharon early Monday was the result of a tornado. National Weather Service Meteorologist Karl Jungbluth confirmed the twist was an EF1, which briefly touched down just after 5 a.m. on the south side of the Mahaska County town. It destroyed part of a storage building, throwing debris into a cemetery and onto the high school track. 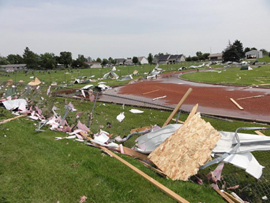 He estimates the tornado was only on the ground “for a minute or two” with maximum winds at 110 miles an hour. No one was injured. Straight-line winds from the storm also toppled trees and power lines and knocked over gravestones in the cemetery. No tornado warning was issued for the area.

“The radar signatures – we’ve looked back at that and there was not strong radar signature even indicating a tornado,” Jungbluth said. “So, it was one of those quick hitting events where a thunderstorm can create some things very quickly without a lot of radar signature and then move on.” Today marks the official start of summer, but Jungbluth says severe weather season will remain in full swing.

“With the heat and humidity of summer, we get lots of thunderstorms and there can be all kinds of severe weather well into July,” Jungbluth said. “After that, things start to calm down, though we still do get thunderstorms well into the fall.”