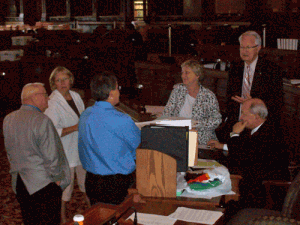 Some legislators have begun joking about “white smoke” from some statehouse committee rooms as lawmakers strike final agreements on some parts of the state budget.

“We seriously believed that it was time to, you know, get down to business and reach an agreement. I think the public wanted us to get this resolved,” Dotzler says. “…It was important to reach agreement without shutting government down.”

The two political parties have yet to agree on spending levels for other areas of state government, like education. Representative Jason Schultz of Schleswig, the Republican co-chair of the economic development budget committee, says the two parties had less significant differences of opinion over economic development priorities.

“There was definitely two different perspectives represented throughout the year,” Schultz says. “But never was there an emotional, ideological stalemate.”

Both legislators say there is money in their economic development budget plan to keep 37 regional Workforce Development offices open, but the agency’s director has indicated she intends to close those offices.