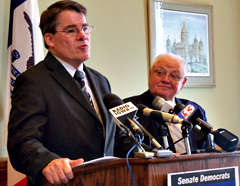 Late this morning the Iowa Senate took about half an hour to pass four bills on which the two parties have compromised.

House Speaker Kraig Paulsen, a Republican from Hiawatha, agrees with those sentiments.
“We have a whole host of options,” Paulsen says. “But we’re going to do what we need to do to make sure state government operates.”

There have been agreements on some components of the state budget, namely economic development priorities, public safety initiatives and spending for the departments of agriculture and natural resources.  Those budgets were outlined in three of the four bills which cleared the Senate late this morning. However, the two parties still haven’t agreed on the largest portion of the state budget — education spending. Gronstal admits that’s a sticking point.

The two parties have agreed to a status quo spending level on K-12 public schools for the academic year that begins this fall. House Republicans propose a two percent increase in the following year, while Senate Democrats propose a three percent bump in general state aid to public schools. Paulsen says other education issues, like the level of state spending on preschool, haven’t been resolved either.

“But, at the same time, we’re also slowly working through those pieces,” Paulsen says. “And there’s pieces of those budgets that we’ve now come to agreement on.”

The next state fiscal year begins on Friday, July 1. Both the House and the Senate are off for the weekend, scheduled to reconvene on Monday, facing that deadline.