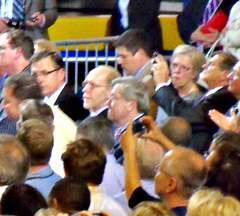 Governor Branstad listening to President Obama while sitting next to Congressman Dave Loebsack.

The governor said afterward he felt the president should have addressed regulations and tax barriers that are hurting business growth. Branstad says he was concerned that Obama didn’t address those issues on the economy and “I think that’s important.”

Branstad was asked why he would attend the speech by the president from a different party who is running for re-election. He says he used the visit to talk with the president before his speech. Branstad says he thinks we always need to appreciate it when the president comes to our state, and said he asked the president to come back and visit western Iowa. The governor says he told Obama he is appreciative of the federal disaster declaration for the counties along the Missouri River, and hopes the president will visit the area.

“I asked him to come back and view the flood damage himself, and he said ‘we got to do that’ and so hopefully he’ll do that,” Branstad said. White House officials say the trip to Iowa wasn’t political, but Branstad says there were political themes, and the president chose to visit a business that is doing well.

Branstad says he’s been through enough campaigns to know “you choose to go to places where you think you are going to have a positive reception, and this is a great company.” Obama stuck to his economic theme during his short speech and did not mention the flooding trouble in western Iowa.