You are here: Home / Business / Property tax reform “off the table” 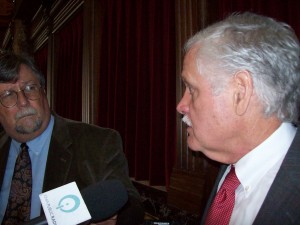 It appears six months of negotiations over property tax reform have failed and the 2011 legislative session will conclude within the next 48 hours without action on the issue.

Senate Republican Leader Paul McKinley says it’s an “unfortunate” turn of events. “I think Iowans want property tax relief because our property taxes are too high on all classes of property,” McKinley says.

Senator Joe Bolkcom, a Democrat from Iowa City, is chairman of the Senate committee that drafts tax policy. “To have this fall off the table is quite a disappointment,” Bolkcom says.

But the two parties were far apart in approaches.  Democrats proposed a state tax credit for commercial property owners, while Republicans proposed a reduction in commercial and industrial property tax rates of up to 40 percent, along with changes that would impact people who own homes and farmland, too.

“Everyone came into the 2011 legislative session talking about job creation. Everyone identified the number one hurdle for job creation was commercial and industrial property taxes and yet, at the end of the day, we’ve got nothing to move forward on and help job creators create jobs,” says John Gilliland of the Iowa Association of Business & Industry. “So that’s very disappointing.”

But Senate Democratic Leader Mike Gronstal is hinting there’s a possibility a deal on property tax reform could still be struck yet this year.  “Nothing is ever dead,” Gronstal says.

Branstad spokesman Tim Albrecht issued a written statement this afternoon. “Iowa’s commercial property taxes are the highest in the nation, making our state wildly uncompetitive with other states and nations in attracting good jobs. Iowa’s property taxes are slated to increase by $1.3 billion over the next five years, and Gov. Branstad continues to believe inaction is unacceptable,” Albrecht said. “Should the Legislature fail to advance the governor’s plan, and allow property taxes to rise at this unsustainable level, we will in the future continue to pursue Gov. Branstad’s common-sense solution that he crafted on behalf of Iowa’s taxpayers.”