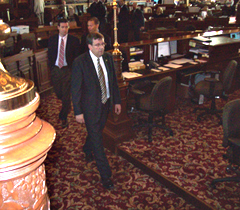 Just one issue remains unresolved in next year’s state budget, but the impasse now threatens to derail the effort to complete work on the budget today before the new state fiscal year begins tomorrow.

House Republicans are now proposing an even tougher abortion restriction, with the ultimate goal of ensuring no taxpayer dollars are used to pay for abortons in Iowa, not even when a Medicaid patient’s life is at risk because of the pregnancy.

“They want to say that a woman who has been raped, the abortion will not be covered,” Gronstal says.

Under the GOP plan, abortions in cases of incest wouldn’t be covered either, or abortions to deal with a miscarriage. Under rules which have been in force since 1978, Medicaid has covered abortions when the pregnancy is the result of rape or incest, when there are profound fetal deformities, when the mother’s life is in danger or when an abortion is necessary because of a miscarriage.

Representative Matt Windschitl, a Republican from Missouri Valley, says Republicans in the House believe strongly that no taxpayer dollars should be used to pay for any abortion, regardless of the circumstances — and they’re willing to stand their ground on the issue even if it means the state budget plan isn’t finalized in time.

“It doesn’t mean that’s what we want to do. That’s not what we want to do. We want to reach resolution for Iowans. We want to take care of their priorities, but at the same time you have to make sure that you’re taking care of all the priorities. You can’t just negate one issue to try and get the other one done,” Windschitl says. “…I fully hope that by the end of the day, before midnight, we can walk out of here, I can go back home and see my kids and then go right back to work tomorrow moring for the railroad and not have to think about coming back to Des Moines until next January.”

Representative Dave Heaton, a Republican from Mount Pleasant, has been leading the 10-member committee which has been struggling to reach a compromise on this issue.  He says it’s now in the hands of the governor and top legislative leaders.

“I’m not the negotiator anymore. We tried that yesterday afternoon,” Heaton says. “Other people have these negotiations (now), not me.”

“We’ve had very productive visits with the senate. We’re going to work very hard to find some common ground here,” Upmeyer said. “…There’s a possible solution here, we just have to find it.”

Senator Gronstal told reporters the only thing that stands in the way of adjournment is this stalemate over abortion.

“That is the only issue left that separates us,” he said.

Under the latest Republican proposal, there would no longer be a so-called “line item” in the state budget which spells out the five situations when the joint state-federal Medicaid program would cover abortions.  The move would require Governor Branstad to apply for a waiver from the federal government.  While federal officials consider the governor’s request, abortions in cases of rape, incest, fetal abnormality, miscarriage or to save te life of the mother would shift into the charity care budget of the University of Iowa Hospitals.  It means taxpayer dollars would still cover those abortions, but there would no longer be language about abortions in the section of the state budget which governs Medicaid spending.