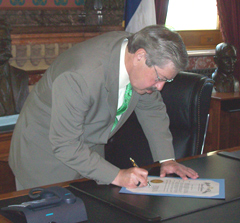 After days of deadlock, Iowa legislators have backed away from a confrontation over abortion.

House Republicans had proposed new restrictions to prevent all taxpayer-funded abortions at the University of Iowa, but Democrats in the Senate resisted.

In the end, the deal allows current practice to continue. Under rules in place for 33 years, Medicaid patients in Iowa who are the victims of rape or incest, who’ve had a miscarriage, who have a profoundly deformed fetus or who find their lives endangered by the pregnancy may obtain a taxpayer-funded abortion at the University of Iowa.

This was the last issue to resolve before legislators could complete action on next year’s state budget plan. Governor Branstad is expressing relief. “Here it is: the last day of the fiscal year,” Branstad says. “And it looks like they’re going to get done.”

The deal on abortion policy does require University of Iowa hospital staff to inform the woman of other options, like adoption, and to give her an opportunity to see an ultrasound before the abortion is performed.

“We believe that is a huge step because, if you look at the statistical figures, women who view an ultrasound before an abortion, the majority of the time they choose to continue the pregnancy and to actually bring that child into the world,” Windschitl says.

The Iowa House was first to approve the deal which is included in a massive bill outlining state spending on public health and human services programs. The Senate approved the plan several minutes later. The House adjourned at 3:41 this afternoon; the Senate adjourned two minutes later.

The new state fiscal year begins tomorrow and legislators passed a bill earlier this afternoon which ensures Branstad has the authority to keep state government operating while he reviews the budget bills legislators passed this week.

“This is a mechanism to make sure that I have what the constitution authorizes, the 30 days to carefully review and scrutinize (the bills), make sure that if we do identify any mistakes we can take care of that through item vetos and things like that, so I appreciate the legislature doing this,” Branstad says. “I think this is essential so we can do a very thoughtful review of all the bills passed in the last three days ofthe session.”