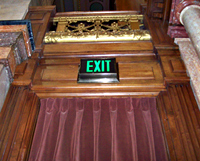 Legislators were finally able to end the session on the last day of the fiscal year.

With a little over eight hours to spare, the Iowa legislature took final action on the last piece of a nearly $6 billion state budget plan Thursday afternoon. The new state budgeting year starts just after midnight on Friday.

House Republican Leader Linda Upmeyer of Garner made this declaration seconds after the House adjourned for the year:  “I have to say it’s so much better to adjourn at 3:30 in the afternoon than at 3:30 in the morning.”

The Senate concluded two minutes later. The final drama of the final day came when a deal was struck on abortion policy.

It allows Republicans to tout a move to give women getting a taxpayer-financed abortion at the University of Iowa Hospitals the option of viewing an ultrasound beforehand. Representative Matt Windschitl, a Republican from Missouri Valley, was involved in the negotiations.

“No, it’s not as far as what I’d like to go,” he says. “I mean, we all know my personal convictions, that life is a gift from God and that I don’t believe in abortion, but this is our attempt to find that middle ground.”

Senator Jack Hatch of Des Moines was the lead negotiator on the issue for the Democrats. “We believe it’s crafted in a way that provides new assurances,” Hatch says, “and also allows and maintains the same level of care to women.”

Lawmakers began the 2011 legislative session in January with a  to-do list that included property tax reform, but that issue was tabled this week as the final details of the state budget plan were settled. During today’s closing moments, House Speaker Kraig Paulsen called it a “unique” session.

“It’s obviously going to be recorded as one of the longest lasting,” Paulen said, “if I am told correctly, the third-longest session in the history of Iowa.”

Paulsen, who is from Hiawatha, is the top-ranking Republican in the legislature. “The people of Iowa chose to elect a Republican governor, a Republican House and a Democrat Senate and typically in divided government, things take a little longer to process,” Paulsen said. “While I would not have predicted, nor do I ever care to live through another 172-day session, and I think this is healthy and I think it serves the people of Iowa extremely well.”

The top Democrat in the Senate decided to speed toward final adjournment rather than read his speech for the occasion. In his written remarks, Senate Democratic Leader Mike Gronstal said it had been a “difficult session” and finding agreement had “not been easy.”  Gronstal said he still “didn’t understand why” Republicans fought so hard to roll state spending back to 2008 levels when the state ended the fiscal year with a $400 million surplus and another $600 million in emergency cash reserves.

Republicans say they were responding to voters who’ve demanded a leaner state government.

In action today, the House and Senate approved two final bills. One assures that the governor has the authority keep state government operating through the month of July as he and his staff review the pages upon pages of budget detail outlined in almost a dozen different bills. Earlier this afternoon, during an interview in his office, Branstad said he needs that extra time.

“Normally the legislature would have completed its work well in advance of 30 days before the end of the fiscal year,” Branstad said. “In this case, since the bills were passed on the last day of the fiscal year, we won’t even get a lot of these bills until after the new fiscal year begins.”

Branstad praised legislators for “cleaning up” some of the financial shenangans of the past, and drafting what he called an “honest” budget.