You are here: Home / Politics / Govt / Bachmann to Tea Party: time to draw line in the sand (audio) 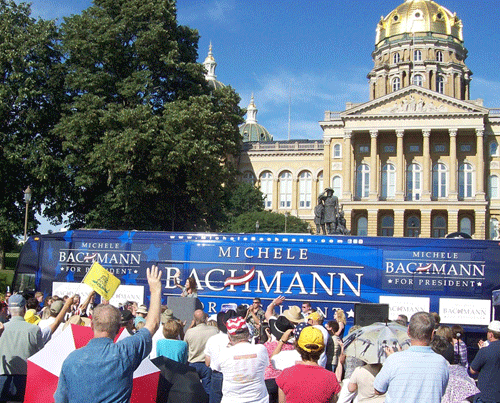 With the song “Promised Land” by Elvis blasting through the speakers as she took the stage, nearly all of the folks in the Tea Party crowd got to their feet and never sat back down during her 25-minute speech.

“The Tea Party gets it. It’s not a political party. It’s an idea and it’s an idea that has captured the hearts and minds of the American people and it’s lit a flame all across the United States, so much so that I know without a shadow of a doubt that Barack Obama will be a one-term president,” Bachmann said, the crowd joining in to repeat that last phrase about Obama, which has become a signature line in Bachmann’s campaign speeches.

Bachmann, in the midst of her third term in congress, told the crowd she had never voted to raise the debt ceiling and did not intend to do so even if Republican leaders in congress strike a deal with President Obama.

Bachmann, who started the “Tea Party Caucus” on congress, told the Iowa crowd she has been the Tea Party “voice” in Washington, D.C. “And the politicians started waking up in the halls of congress. They know you’re here,” Bachmann said. “They’re listening to you. They’re paying attention to you.”

Bachmann said it was time for the Tea Party to help “draw a line in the sand” on a variety of financial issues, from future federal bail-outs of failing industries to greater public scrutiny of the Federal Reserve.

Bachmann is one of two Republican presidential candidates who plan to walk in the Clear Lake 4th of July parade today. Newt Gingrich is the other. A third GOP candidate plans to be in three other parades. Rick Santorum will walk in parades in Urbandale, Pella and Iowa Falls today.

During the last Iowa Caucus campaign, Hillary and Bill Clinton walked the 2007 Clear Lake 4th of July parade route together.  It was the former president’s first time on the Iowa campaign trail with his wife. Republican candidate Mitt Romney was in the same Clear Lake parade that year.