You are here: Home / Military / Iowa soldier dies in attack in Iraq 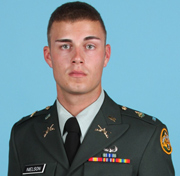 The Department of Defense has confirmed the death of an Iowan serving in the Army in Iraq.

Twenty-seven-year-old Captain Mathew Nielson of Jefferson died June 29th during an attack by insurgents. Two other soldiers from West Virginia and Georgia were killed  in the attack.

Nielson was born in Omaha Nebraska and grew up in Ogden and Jefferson Iowa. He was a graduate of the University of Northern Iowa’s R-O-T-C program, graduating as a second lieutenant in May of 2008.

Nielson was the oldest of eight children and is survived by his three brothers, four sisters and his mother and father, Christine and Roger Nielson.

Nielson’s family released this statement:
“Since Matt was a small boy he loved anything military, so he died doing what he loved best. Serving others was of the utmost importance to him and how he wanted to spend his life. He always gave his all, whatever he was doing. Matthew was a beloved son, brother, friend and Soldier. He’s already home, and we know we’ll be together again someday. Apart, but forever in our hearts. Psalms 11.”