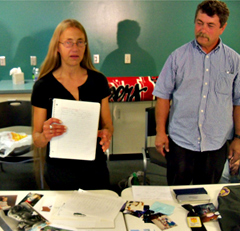 Christine and Roger Nielson show off some mementos from their son Matthew.

A central Iowa family talked with reporters Tuesday about a fallen soldier who was their son, brother and hero.

Twenty-seven-year-old Captain Matthew Nielson of Jefferson died June 29th in an insurgent attack in Iraq while serving with the U.S. Army.

Nielson’s dad Roger and mother Christine met with reporters in Jefferson along with his four sisters and three brothers.   Nielson family 45:00 MP3

Roger Nielson says traveling to Dover Air Force base in Washington, D.C. to see his son’s body arrive from overseas was a big help in dealing with the loss.

“Words just can hardly describe the feelings that parents and sisters and brothers have when you’re out there with the other soldiers, “Nielson said,” the ceremony, deplaning, carrying him across the tarmac, that sense of bringing him home As a dad, that answered a lot of questions, because they brought my kid home.” Matthew Nielson was born in Omaha, Nebraska and his parents later moved to Lincoln and then to Ogden, Iowa and finally Jefferson.

Christine Nielson says her son was interested in anything to do with the military, Star Wars and knights as he grew up. She says the home-schooled boy was almost obsessive about keeping things in order. Christine says that was evident in the boxes of belongings he stored at their home.

Nielson says military people are known as being extremely orderly, but she says he went to the extreme with numbers on each box and lists on his computer of what is in each box.

She says he could through the list and tell her what he needed and what box it was in so she could mail it to him. Christine says Matthew was a challenge as he always wanted her to ready to him, even though she had other young kids always around needing attention.

“He was an interesting kid, loved to read, would read anything, I mean if there was a book sitting around, he would read it,” she said. She says they have some of his old school things and in it there was a list from one year that included all the books that he had read.

Nielson was known as the “Leader of the Pack” as he was the oldest of eight kids. Brother Nate worked with Matthew at the Fareway store and says even though he was much younger, his brother would always ask him his ideas and thoughts on how to do things.

Nate says even though his brother would always ask him about things, his brother was his hero. The other brothers and sisters nodded in agreement when Nate called him a hero. 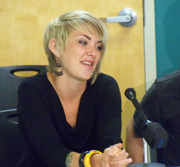 Sister Heather said it was tough finding things to do when her brother visited her in Colorado. She says she last talked to her brother about one month ago after he had been on a vacation to Australia.

Heather says Matthew told her about his “Australian adventures” — but she said it was funny that he said the best part of the trip was getting to sleep in a real bed and drink a beer after spending a year in Iraq.

Christine Nielson said she’s like her son to be remembered as someone who was honest and tried to help everyone he met.

She says he was friendly and worked in the produce section at Fareway, the first place you see in the store, so he greeted everyone that came in the door and remembered things about him. “There’s a lot of old people in this town that probably know him,” Nielson said. She says he was the same way when he had a paper route delivering the Boone paper. “Man that kid got tips,” she said. Nielson’s father agreed with his wife.

“I’d people to think about Matthew as a strong, caring, thoughtful young, man, that if a job needs to be done, get it done,” Roger Nielson said. Both parents said they were hesitant to talk about their son, but were proud of the way he went after everything he did and wanted to be the best. The family showed several pictures of Matthew and shared some of the old papers he had written.

Nielson went to the University of Northern Iowa and it was there he joined the R.O.T.C. program and graduated as a second Lieutenant. He won numerous academic and military awards.

Funeral arrangements are still pending the return of Nielson’s body to Iowa.