“Iowa has done a remarkable job in maintaining, preserving its first-in-the-nation caucus status, but we want to make sure it’s not just first, but it’s also right in selecting and predicting the nominee and the ultimate selection for president,” Pawlenty says. “I’m just trying to urge them to consider the whole process, not just the first step.”

Pawlenty, the former governor of Minnesota, spoke earlier this afternoon to about 75 people at the Surf Ballroom in Clear Lake. Pawlenty told reporters his comments were not directed at competitor Michele Bachmann, a fellow Minnesotan. 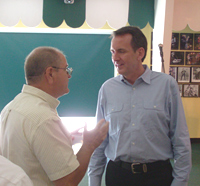 “No, it wasn’t directed at anybody in particular,” Pawlenty said. “I was just trying to make the general point that Iowa plays such a prominent role in the selection process so early, that (Iowans) can make or break campaigns.”

The winner of the 2008 Iowa Caucuses was former Arkansas Governor Mike Huckabee, who did not go on to win the GOP’s nomination. Pawlenty has just hired Huckabee’s daughter, Sarah Huckabee Sanders, to beef up his effort for the Iowa Republican Party’s Straw Poll in mid-August.  Mike Huckabee finished second in the 2007 Iowa Straw Poll.

“She’s an enormous talent,” Pawlenty told reporters today. “She’s somebody who’s not only smart and strategic, but she’s an incredible leader and I think is going to bring a lot of momentum to not only our campaign in Iowa but across the whole country.”

A recent Des Moines Register Iowa Poll showed Bachmann, the Minnesota congresswoman, running nearly dead even with former Massachusetts Governor Mitt Romney, while Pawlenty was 16 percentage points behind the pair of poll leaders.  Pawlenty is now running television ads in central Iowa, presenting himself as a leader who got results when he was Minnesota’s governor.

“When President Obama ran last time he captured the nation, captured Iowa, captured Minnesota with this soaring rhetoric, but it turned out to be hollow. It turned out to be mostly entertaining, but not very good for the country and not very productive and we’ve got to move beyond that,” Pawlenty said today in Clear Lake. “We’ve got to bring forward the real issues that the nation is facing. We’ve got to put real, specific solutions on the table.”

Pawlenty is in the midst of a two-day campaign swing that includes a speech in Ames this evening and a town hall meeting at his Iowa campaign headquarters tomorrow.