You are here: Home / Politics / Govt / Pawlenty says his style is “nice — and strong” 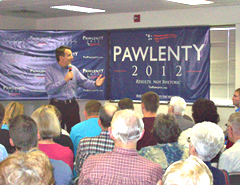 Tim Pawlenty speaks during a campaign stop in Iowa.

A man at a town hall meeting in Iowa today urged Republican presidential candidate Tim Pawlenty to present a stronger “demeanor” on the campaign trail, prompting Pawlenty to suggest he operates in “more than one gear”.

“…You know, I’m an old hockey player,” Pawlenty said. “I’ve probably been in more fights than the rest of these candidates combined.”

Pawlenty held a town hall meeting at his campaign headquarters in Urbandale this afternoon. Pawlenty told the crowd, including folks who logged on via Facebook, that he had set a record for the number of vetoes he issued as a two-term Minnesota governor and he cautioned against mistaking his civil tone with weakness.

“The loudest guy or woman in a bar usually isn’t the toughest,” Pawlenty said. “They’re usually just the loudest.”

Pawlenty pointed to Ronald Reagan as a role model.

“Look at his style of leadership: hopeful, optimistic, joyful, positive, courteous, civil, decent, but strong,” Pawlenty said. “…You don’t have to be a jerk to be strong. You can be nice and strong. And that’s the lesson and style that I have.”

It was 64-year-old Bill Campbell, a retired postal worker from Indianola, who urged Pawlenty to present a stronger demeanor on the campaign trail and he told reporters after the town hall meeting was over that Pawlenty has the “substance” to be president, but Campbell worries Pawlenty’s style won’t capture the attention of voters.

“I think he comes across as kind of what (FOX News Channel host) Bill O’Reilly said — vanilla,” Campbell said.  “I think he needs to have a little bit more demeanor about him that says he’s strong.”